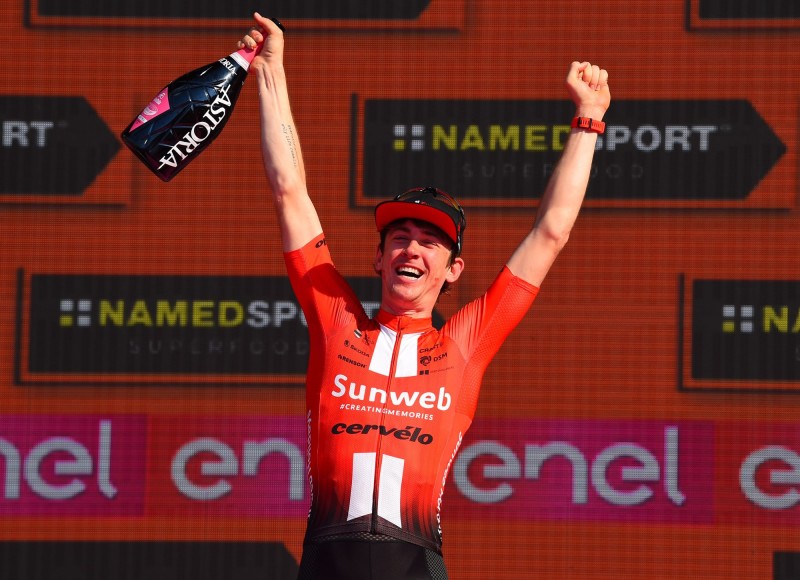 Team Sunweb (Italy) - Press Release: Ending with a 17 kilometre time trial around Verona, the Giro had one last sting in its tail with a tricky parcours awaiting the riders today. The focal point of the route was a four and a half kilometre long climb that averaged over four percent in gradient. Over the top of the climb a sinuous and technical descent lead onto the flatter finish.

Chad Haga was first off the start ramp for the team and set a strong intermediate time on his Cervelo P5, only six seconds behind the best time at that point. Haga continued to pace himself well, taking the best possible lines on the tricky descent before powering along the flat to the finish. Setting a time of 22 minutes and seven seconds, it was enough to see the Team Sunweb rider move into the provisional lead, and into the hot-seat for the afternoon. Riders continued to come through the finish line but Haga’s time stood strong. With pre-stage favourite Roglic starting fourth last, it was a nervous wait for Haga and the team. However, the time set was more than good enough to secure the victory, with Haga taking his first Grand Tour stage win, putting Team Sunweb’s two Keep Challenging stripes back on the podium again. A great result for the whole team after everyone believed that the chances would come, keeping the faith all the way to Verona.