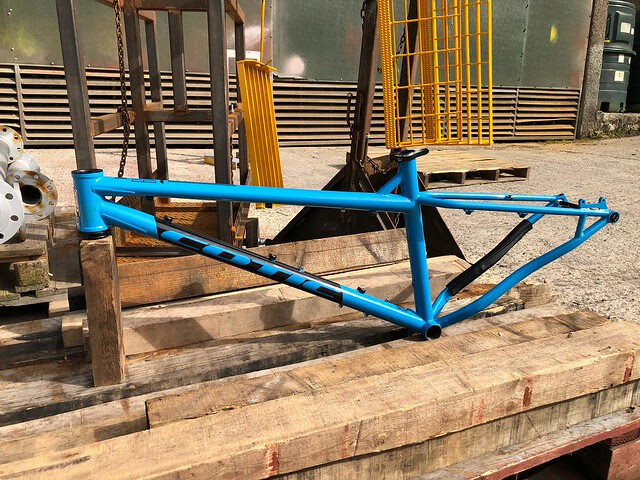 Cotic (United Kingdom) - Press Release: A slightly sombre email this one unfortunately, but a chance to do some good.

We have recently had a BfeMAX frame returned to us for a refund, as sadly it's owner had built it up, ridden it round the block and then received a terminal bowel cancer diagnosis. A real tough draw.

To try and do something helpful in this awful situation we have decided to put his frame up for sale on our outlet page, at the full price of £594, and donate the full amount including the VAT to Bowel Cancer UK; the UK's leading charity for this dreadful disease.

It's a size small, gloss blue BFeMAX frame in excellent condition and has a plain black headset made for us by Superstar fitted, so you can plug your tapered steerer forks from 120mm-160mm travel straight in. As I said, it was built up, barely ridden, and then stripped again. These frames sold out in 3 weeks after we launched them in May, and we won't have them back in stock until December, even then, the blue won't be returning.

This is your chance to own a rare frame, raise some money for a great cause and bring something positive to this heartbreaking story.

For more information about this article from Cotic click here.

Other articles from Cotic.