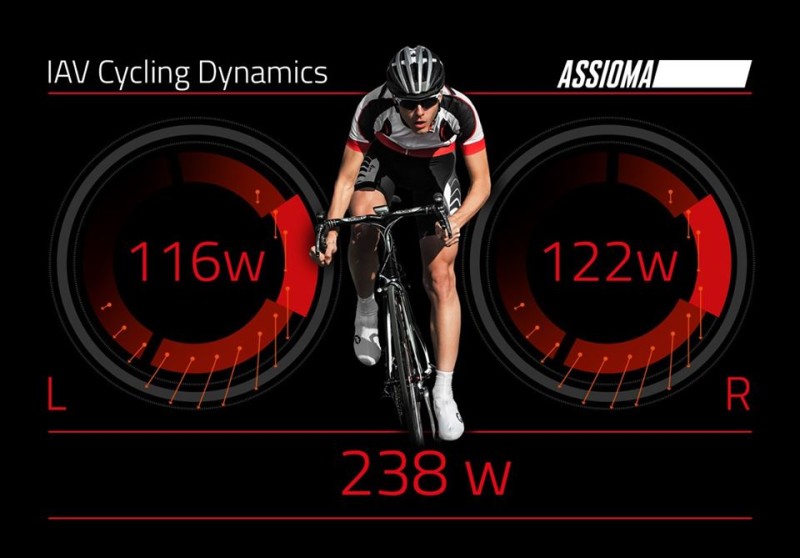 Favero Electronics (Italy) - Press Release: These metrics have been developed in compliance to the ANT+ standard protocol.

These metrics are the standardized and "open" version of the homonyms "Cycling Dynamics" by Garmin. The big difference is that Assioma’s calculation is based on the IAV Power system.

Thanks to the exclusive IAV Power system and integrated gyroscope, Assioma measures the real instantaneous angular velocity for every single pedaling. This system, in addiction to guarantee precision in power calculation, can be used to measure advanced metrics like the Power Phase. Yes, even in this case the integrated gyroscope of Assioma makes the difference!

The Power Phase (PP) indicates the segment of a pedaling stroke in which a positive torque is produced, in this phase over 90% of the propulsive force that moves the bicycle forward is generated.

The Favero Assioma power meter calculates this advanced metric with exceptional precision thanks to the exclusive IAV Power system and integrated gyroscope.

For this reason we call this metric IAV Power Phase.

The Graphic above represents the power produced in a single pedal stroke. The IAV Power Phase is symbolized by the red segment on the circumference that indicates where the power begins and ends.

The green sub-segment, instead, is the Power Phase Peak (PPP) and shows where the majority of power is produced in a single pedal stroke. The normal bike computers setting for Power Phase Peak is to represent 50% of the power output but this can be adjusted up or down depending on your preferences.
IAV Rider Position.

The Rider Position metric shows how much time a cyclist passes on the pedals in seated or standing position. Even in this case, the Assioma IAV Power system is exploited to obtain more accuracy in the measurement. So, we named this metric: IAV Rider Position.

The IAV Rider Position metric combined with the registered track, allows to analyze the trend of the cyclist to change position on the bike during particular moments of the ride, in other words to understand how a specific position can influence the performance.

How to enable the IAV Cycling Dynamics?

All the Favero Assioma’s owners can enable the IAV Cycling Dynamics for free.

In order to verify if your Assioma already has the IAV Cycling Dynamics available, check on the Favero Assioma's app if your power meter is updated to the 4.00 firmware version or higher.

On first use it is necessary to configure the metrics on the bike computer activating the Cycling Dynamics and selecting the corresponding screen in order to view it on the display.

For more information about this article from Favero Electronics click here.

Other articles from Favero Electronics.