Matthews Doubles Up with Powerful Sprint Win in Catalunya 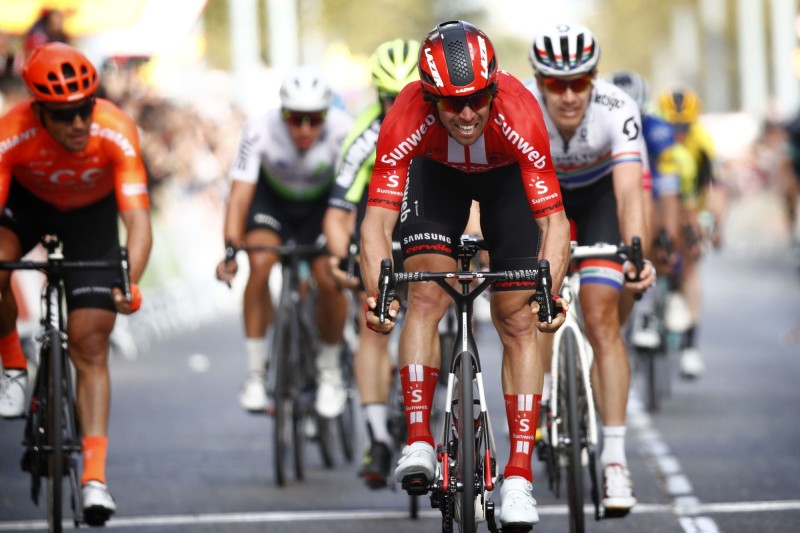 Team Sunweb (Spain) - Press Release: Today’s stage would see the riders travel 169 kilometres from Valls to Vila-seca. Although there were no mountain passes on offer, the parcours were rolling and very hilly in the opening two thirds of the afternoon; terrain that might tempt another strong breakaway attempt from the peloton. A group of five managed to escape but after missing out yesterday, the teams with sprinters were not going to give it too much leeway with the gap reaching a maximum of only three minutes.

Despite the break’s best attempt, the peloton was back together with around 12 kilometres to go. As the pace ramped up, Team Sunweb moved up in numbers to the front of the bunch to ensure Michael Matthews was in a good position for the expected sprint finish. It was a hectic finale with numerous turns in the closing kilometre but Matthews remained attentive at the front. He launched his sprint at the perfect moment, holding on for the stage win by less than a wheel length and taking the team’s second win of the week.

Speaking at the finish Team Sunweb coach Aike Visbeek was delighted with the team’s performance: “With the disappointment yesterday we let the other sprint teams take control at the start of the stage. After an hour and a half of racing we focused and began to help at the front of the peloton, committing fully to Michael for the stage; the guys did a really good job all afternoon. The three hard days previously were really in our favour as there are some fast sprinters here and it shows that Michael’s shape is on the up, because he can recover well after the tough stages. I’m really happy and relieved that we could do it today for Wilco, and the result is a good confidence boost for Michael and the team.”

Matthews added: “I was really tired after the difficult few stages we’ve had so I wasn’t sure if I would be up for the sprint today. However, around halfway through the stage I felt much better and the team started to work at the front. The sprint was very technical but the guys positioned me at the head of the bunch coming under the flamme rouge. I followed the right wheels and just had enough to hold on for the win. The team were very motivated to get a result for Wilco today after his crash in yesterday’s stage and I’m really happy we pulled it off.”