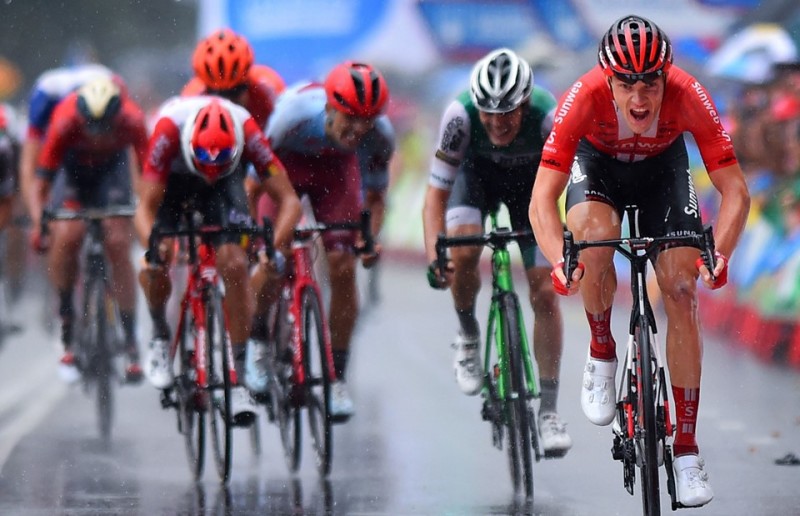 Team Sunweb (Spain) - Press Release: The penultimate day of racing before the first rest day saw the peloton take on a testing stage, with a difficult climb cresting with only 30 kilometres left in the day. With it being a tricky finale that on paper appeared too hard for the sprinters but too easy for the GC riders, it looked to be a good day to be in the breakaway. As a result, there was a fierce battle in the opening 25 kilometres before a large group of 21 riders broke clear, with Nikias Arndt and Martijn Tusveld in there for the team.

Initially their gap was held at roughly four minutes as the stage stood in the balance, but as the peloton headed towards the categorised climb, the gap was out to six minutes with 40 kilometres to go. It was on that climb that the pace increased, with those stronger on the ascents looking to drop the faster riders. Tusveld rode strongly and maintained contact with the group on the climb, with Arndt digging deep and fighting back onto the group just as the descent started.

It was at that point that the rain started to pour down, making the descent a bit more treacherous. Tusveld sensed an opportunity and managed to break clear with two others, allowing Arndt to sit in the wheels behind and save energy. Entering the final five kilometres Tusveld’s group was about to be caught before he counter attacked and got a gap. Unfortunately, he slid out around a roundabout but managed to get back onto the bike ok and finish the stage. Arndt stayed attentive at the front of the breakaway and followed the attacks as they made their way to the finish in Igualada. On the uphill drag to the line Arndt timed his sprint perfectly on his Cervélo S5, producing a powerful kick and winning the stage by a couple of bike lengths.