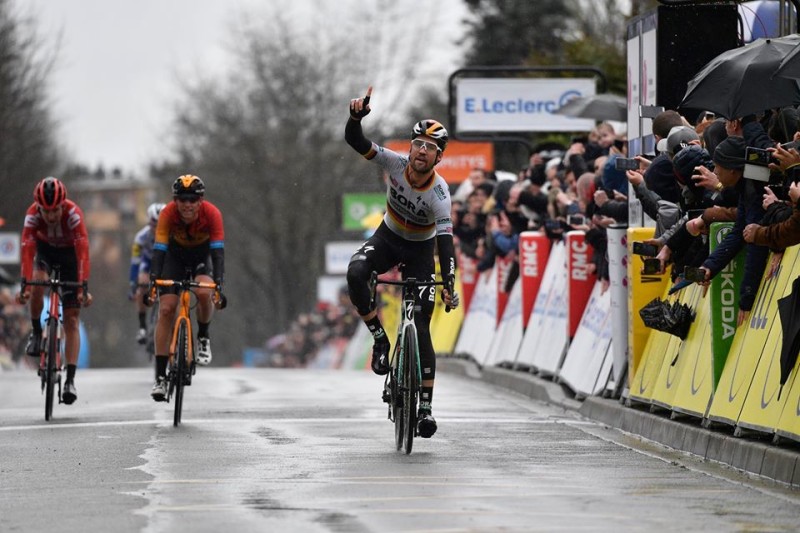 BORA-hansgrohe Team (France) - Press Release: Following an undulating 154km parcours, stage 1 of Paris-Nice was characterised by wet and windy weather, the conditions making it difficult from the outset. Following a circuitous out and back route that started and finished in Plaisir, riders faced crosswinds that regularly split the peloton. While a break did form in the early kilometres and built a strong advantage, as the day went on and the winds took their toll, the bunch used their strength in numbers to combat the wind and bring the break back in contact. The challenging road conditions, a combination of wind, rain and the occasional cobblestone section, saw riders crash and gaps form, but the BORA-hansgrohe riders kept out of trouble and stayed near the front. As more breaks formed, Patrick Konrad and Felix Grossschartner went out in front to keep things under control, but a strong duo went on the attack with 29km to go, just as the rain got even worse. With 10km remaining, the gap was still at more than thirty seconds, but as BORA-hansgrohe hit the front again, the advantage dropped down to ten seconds with 5km to go. The German National Champion, Maximilian Schachmann, gave chase as the kilometres dropped, joining up with another rider and bridging to the lead duo with 3km left, before the BORA-hansgrohe rider attacked with 2km to go. Reeled back, Maximilian wasn’t going to be denied as the quartet approached the finish line and he timed his sprint to perfection – taking a commanding victory and claiming the first stage of the 2020 Paris-Nice race.