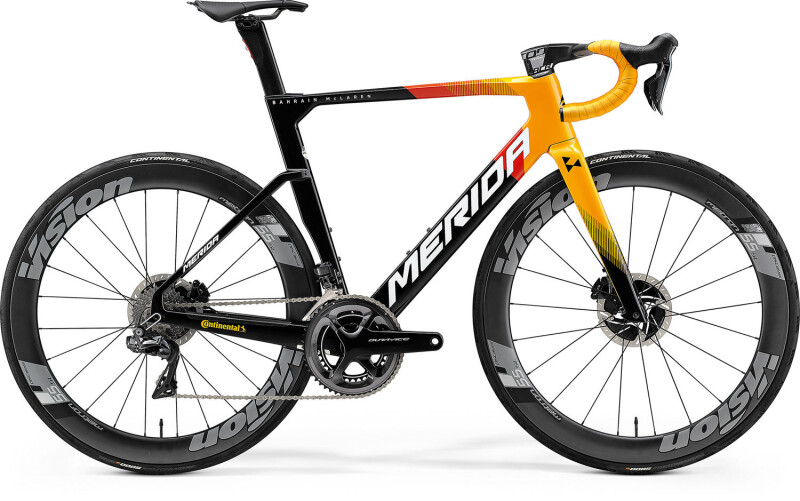 Merida (Taiwan) - Press Release: Originally launched in 2011, our aero bike has seen a series of changes over the years, and we are excited to present the all NEW REACTO prior to the start of the 2020 Tour de France.

The 2011 version of the REACTO preceded the ‘trend’ of aero bikes in the peloton, but the aero-shape of the fork, seat-tube, seat-post and rear-frame already pointed towards the development of this new trend. All cables were already integrated at that point, and a dedicated Di2 version was also available.

In 2012 a rubber insert was added to the S-FLEX seat post bringing unknown levels of comfort to the aero segment.

But the most significant breakthrough for our REACTO was the launch of version II in 2013, in line with the launch of TEAM LAMPRE MERIDA. The REACTO II was a purebred aero bike particularly aimed at sprinters and breakaway riders.

Thanks to utilising many details we’ve originally developed for our TT-bike WARP TT, the aero-performance was absolutely state of the art. The REACTO II had the 2nd best aero-values at the largest aero-bike wind tunnel test in 2014, initiated by German TOUR-magazine. It also impressed with great head tube stiffness and amazing power transfer. Further to that, the weight and the comfort were always noted as impressive for an aero bike.

For the 2018 season, we went through a long list of changes and launched the REACTO III prior to the start of the Tour. Once again, we were able to reduce the weight and further improve the aerodynamics while also adding disc options to the range and keeping the maintenance and servicing of the bike as simple and as uncomplicated as possible.

Our REACTO III turned more and more into the ‘go-to’ bike of the MERIDA supported teams and also managed to impress the international cycling press with its comfort, aerodynamics and overall riding characteristics.

But all good things have to come to an end, and we were keen to introduce further improvements to our class-leading aero machine.

We are super excited to introduce the all-new REACTO IV which for us symbolised – AERODYNAMICS being REFINED. While being based on the DNA of the previous model, we have managed to bring significant changes and upgrades to the bike, which will make the new REACTO a ‘great performing all-rounder with class-leading aerodynamic performance’.

Let us explain. While focusing our attention on the aerodynamic performance of our aero bike, we were very keen to combine it with other key features and improvements to create the perfect aero all-rounder. The cockpit and front end of the bike feature complete cable integration which offers a saving of 2 Watts. On top of that, the new fork is even more integrated into the frame, which also offers a 2 Watts reduction. The lower attachment points of the seat stays, the concealed seat post clamp, the hidden through axle as well as the more streamlined and neatly integrated disc coolers all contribute to reducing the aerodynamic drag further.

As mentioned before, we did not just focus on the aerodynamic properties but also had a closer look at improving the often-ignored comfort and control factor of aero bikes. Due to the carbon layup and the frame and the impressive compliance of the S-Flex seat post, our REACTO can already shine with class-leading comfort values. But the increase of tyre clearance which can take tyres up to 30 mm width further improves the comfort of the REACTO as well as adds additional control to our aero machine, in particular when the surface gets rough and unpredictable.

Through the integration of these new features and improvements, and after countless hours in the wind tunnel as well as multiple CFD simulations, we are incredibly excited to call the new REACTO the fastest and most comfortable MERIDA aero road bike that shines through its versatility and outstanding all-round performance. The new REACTO - AERODYNAMICS REFINED.

Clean Trials Present You the First Ever Mono Cockpit in Trials