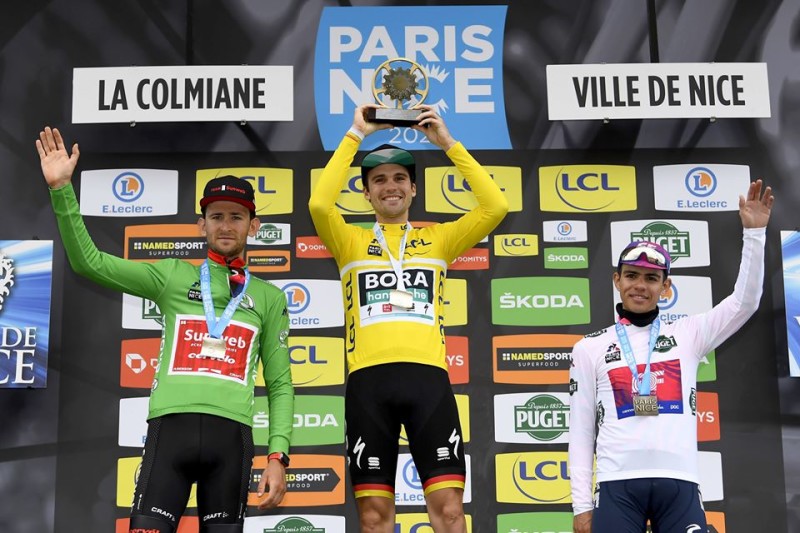 Paris-Nice’s Queen Stage was also the race’s grand finale, with the cancellation of Sunday’s racing meaning that it was all going to come down to the 166.5km of stage 7. Those kilometres were going to be the hardest the riders would face, with four climbs, all of which were first or second category, and the last of these being the first category summit finish on La Colmiane – 16.3km long at 6.3%. Knowing it would all come down to the result on the finish line, the break today included riders who could threaten Maximilian Schachmann’s position in the GC. Riding hard on the front, Michael Schwarzmann protected the GC leader over the day’s first three climbs, and with 20km to go, the gap had come down from almost three minutes to a minute and a half, the whole BORA-hansgrohe team pulling together to keep the pace high and reduce the advantage. The peloton had shed riders on the climbs, but Felix Großschartner and Austrian National Champion, Patrick Konrad, were riding in support of the yellow jersey in a select group. At the foot of the final climb, the reduction in the gap between the break and the peloton meant Maximilian was keeping hold of the GC lead, with the break’s advantage coming down as the stage moved into its final 5km it was just a matter of keeping calm and staying in contention. A late attack for the overall win came to nothing, and as Maximilian crossed the line in sixth on the stage, the German National Champion knew that he’d won the biggest race of his career. Holding the overall lead the entire race after his win on stage 1, Maximilian could finally claim the 2020 Paris-Nice yellow jersey as his own – the second UCI WorldTour stage race win in BORA-hansgrohe’s history.

BikeToday.news Awards 2020 - Vote for your favorite Companies and Products

Victory of Nairo Quintana on the Final Stage of Paris-Nice