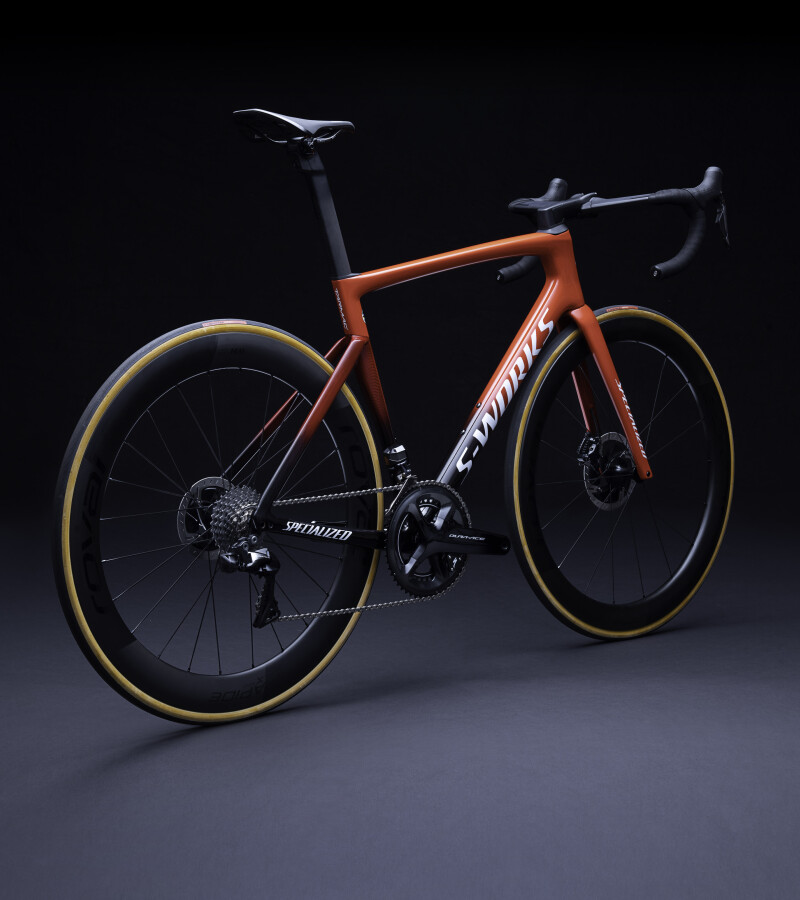 Specialized (United States) - Press Release: One bike to rule them all.

Morph Sagan’s superhuman speed with Alaphilippe’s climbing power and you’ve got the Tarmac SL7. The bike that knows no compromise. Climb on the lightest bike the rules allow, sprint on the fastest – all with legendary Tarmac handling. The only choice you need to make is when to attack.

Forget the days of choosing between a climbing bike and an aero bike. This is 2020, and compromising is a thing of the past. After 45 years of innovation, we’ve dropped a Tarmac that wins by any measure – race at the legal weight limit, on the fastest bike in the peloton.

Anything lighter is illegal:

If you want a lighter bike, you better hand in your racing license. Because at under 6.8kg out of the box, the Tarmac SL7 is legal and ready to race. By limiting the frame’s surface area and strategically reducing wall thickness, our painted FACT 12r frames are just 800 grams – all without giving up an ounce of aero, stiffness or ride quality.

After two decades of Tarmac development, we found a way to go 45 seconds faster over 40k than the Tarmac SL6, without adding a gram of weight. How? By targeting the tubes that truly impact aero – seat tube, seatstays, head tube, fork blades – with shapes from our FreeFoil Shape Library and mating them with hidden cables and our fastest components.

Tarmac handling is so responsive it’s as if it reads your mind – with unrivaled response at the bars, magic at the pedals, and the comfort to stay fresh over hundreds of kilometers. The new Tarmac SL7 raises the bar again, it’s the most balanced Tarmac ever and the greatest example of our Rider-First Engineered™ philosophy.

No bike is more influenced by our racers than the Tarmac. A two-decade long collaboration with the best riders in the world has pushed our engineering team farther than we ever thought possible, so far in fact, that the new Tarmac SL7 redefines the modern race bike. By making compromise a thing of the past, the Tarmac obliterates all competition.

One bike, 45 years of innovation:

Innovation never stops at Specialized. When the SL6 was released, work had already begun on the SL7. Our engineers were committed to ensuring our riders would never have to choose between aero and weight again. Thanks to the best R&D resources in the world and a team of obsessed engineers, the Tarmac SL7 achieves a marriage of light weight, aerodynamics, and ride quality previously thought impossible. Brass Ring? Holy Grail? We just call it the Tarmac SL7.

With extensive data acquisition of forces through every conceivable part of the frame during real world testing, our Rider-First Engineered™ process delivers the optimal balance of stiffness, weight and ride quality from size 44cm to 61cm, ensuring every rider gets the same legendary Tarmac ride quality.

The New Shape of Speed is our doctrine that aero advantage does not need to come at the expense of weight or ride quality and the Tarmac SL7 is the ultimate expression of this. Endless refining of shapes from our FreeFoil Shape Library allowed us to create the lightest, fastest bike ever.

Creating the Tarmac SL7 was an exercise in patience. Every feature was pushed to the limit to ensure optimum aerodynamics, weight, and stiffness, without harming any other feature. This was quite literally a gram by gram battle, lasting years, involving every resource at our disposal.

As fast and light as the new Tarmac SL7 frame is, we couldn’t have achieved our goals without the fastest components in the world. From the slippery Aerofly II bar to the all-new Roval Rapide CLX wheels and even a new SL7 stem that hides cables and saves 45 grams, all while ensuring you can find your fastest fit.

There can be more difference between two male cyclists than between a male and female. Gender alone doesn’t provide nearly enough data to specialize and that means separating the new Tarmac SL7 into male or female bikes is arbitrary and outdated. It means that it’s time to go beyond gender.

For more information about this article from Specialized click here.

Other articles from Specialized.