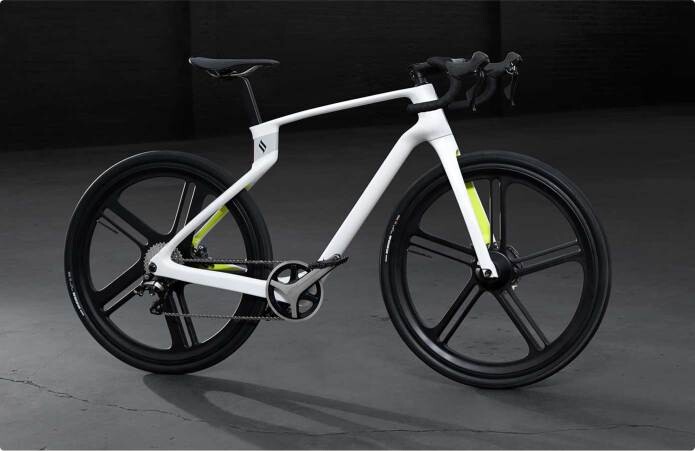 The Superstrata touts a true unibody construction, 3D-printed in a single pass of continuous carbon fiber thermoplastic composite. Unlike other carbon fiber bikes whose frames are glued and bolted together using dozens of individual parts and fabricated from previous-generation thermoset composite materials, the Superstrata frame is constructed without joints or glue for seamless strength. It's also produced using next-generation thermoplastic materials, making it extremely impact resistant, yet remarkably lightweight.

Superstrata uses an advanced 3D-printing process which allows for an unprecedented level of customization. The frame can be tailored to riders' heights, weights, arm and leg lengths, riding positions and even preferred stiffness levels. With over 500,000 possible combinations, Superstrata is the most versatile carbon fiber bike ever made.

"This bike was designed to leverage all the benefits of this new manufacturing technology to get the best of both worlds: strength and lightness," said Bill Stephens, an award-winning bicycle designer and the creative force behind Superstrata.

Two versions will be available: 1) Superstrata C, a bicycle and 2) Superstrata E, an e-bicycle which can be fully charged in two hours, providing for up to a 55-mile range. Both Superstrata C and Superstrata E will feature integrated data and power wiring throughout the frame, enabling a variety of electronic upgrades. Additional options include: different riding styles (racing, street, gravel, or touring), wheel material (metal or carbon fiber), and colorways (light or dark).

"My Olympic race bikes were light, but would crack when pushed too hard or crashed. Having a bike that's light like other carbon fiber bikes but really tough is a dream come true", said Sky Christopherson, two-time former Olympian cyclist and world record holder for the velodrome sprint.

The Superstrata C Bicycle will retail for $2,799 and the Superstrata E E-Bicycle for $3,999. Both are available for pre-order now. Shipping begins in December 2020.

For more information about this article from Superstrata Bike click here.

Other articles from Superstrata Bike.