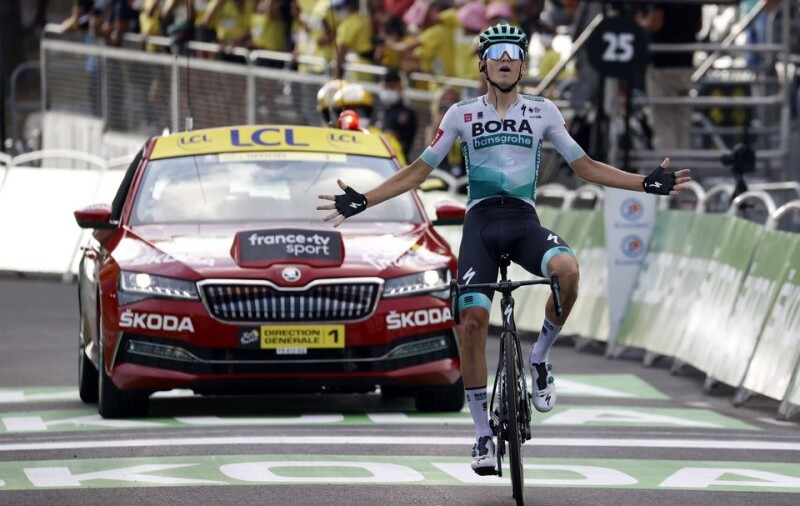 BORA-hansgrohe Team (France) - Press Release: After the second and final rest day, it was straight back into the climbing on stage 16. From the drop of the flag at the start of this 164km stage, riders were climbing and making their way up a fourth category climb – one of five categorised ascents of the day. While the summit finish was only third category, the first category climb immediately preceding it was going to decide who was going to be ready to challenge for the win. After a few attempts to break way fell flat, with 131km to go, the move of the day managed to split off from the peloton with fifteen riders – including Daniel Oss and Lennard Kämna – making their way up the road, with more riders adding to their number shortly afterwards. Their lead going out to more than thirteen minutes, it seemed there would be no chance of the peloton catching them on such a rugged stage. The two second category climbs midway through the day made it tough for the escapees and several dropped off, with Daniel returning to the bunch after his hard work in the break had helped build an insurmountable lead over the peloton. The tough first category Monté de Saint-Nizer-du-Moucherotte was on the horizon, and Lennard went ahead with four others in pursuit of the win. When the attacks came, the young German rider responded well, before going on the attack on the summit of the first category climb with 20km to go, quickly building a lead of thirty seconds with 10km to go and then a minute with 5km left. Having picked the perfect time to get in the break and the perfect time to go on the attack, Lennard drew the best day of his career so far to a close, with his third day in the break finally delivering the first Tour de France stage win he so richly deserved.